Happiness makes the world go round: A view on why Bhutanian principles could increase company performance “Money makes the world go round”, a well-known expression that, since the financial crisis, has suffered a very negative overtone. Even though money does make the world go round, the desire for money, or even greed, has led to the complete standstill of this world. At the same time, the perceived level of stress and number of burnouts is rising at an uncontrollable rate.

Undoubtedly money is important, and the absence of money creates numerous problems, at the same time, it is merely a means to an end. Donald Ducks’ world-famous Scrooge McDuck has shown us long ago that the possession of money does not make us happy long ago. Remarkably, many success stories still focus on making a great amount of money instead of reaching a state of complete happiness.

Focusing on the end goal, happiness, instead of the means is something more and more people and even a small number of countries have adopted a while back, with very positive results.

Companies, nevertheless, still tend to focus on financial numbers in assessing companies as well as employee performance. Taking the analogy of Scrooge McDuck into account, should we still focus on financials or should we look at the end goal: the happiness of our employees?

The first question to ask ourselves is this: how can we focus on happiness on a company level rather than on a personal level? To explore this, we take a look at the example of a small country in Middle-Asia called Bhutan.

Instead of looking at Gross Domestic Product (GDP), Bhutan decided to focus on Gross National Happiness (GNH). The GNH-index is an attempt to measure a country’s happiness through psychological and physiological means. The term “GNH” was first coined by Bhutan’s former King Jigme Singye Wangchuck in 1972. Nowadays, the GNH metric uses seven indicators to determine the index number, which are: economic, environmental, physical, mental, workplace, social and political wellness. Bhutan has made happiness one of the cornerstones of society. Looking at for example Bhutan’s constitution (2008) for example, the 2nd principle is as follows: “2. The State shall strive to promote those conditions that will enable the pursuit of Gross National Happiness”. In everyday practice this was translated into four pillars that new regulations have to contribute to:

Following the example of Bhutan, the UN started releasing a yearly World Happiness Report in 2012. In this report, countries are ranked based on their level of happiness, measured on the following main factors supporting happiness: caring, freedom, generosity, honesty, health, income and good governance. In 2017, Norway tops the chart, followed by Denmark, Iceland and Switzerland. Bhutan however, is listed 97th on the same chart. Looking at the top ranked countries in this list, which are wealthy countries with a clear focus on happiness as well, it seems that it is the combination of GNH and GDP that leads to success, not just the focus on happiness.

Accordingly, what if the same line of reasoning is used for managing a company? What if company management would focus on the end goal, happiness, as well as the means to get there, money?

“You don’t say: I want to become rich first and happy later.”

Nowadays, most companies still focus on merely financial numbers when managing a business. By all means, one should not ignore financial health of the company, but, it is the people that make sure the company is able to reach that status of financial health, and maintain this status as well. This calls for more management metrics than just the financial metrics we tend to use nowadays like profit, overhead and utilization rate.

So what can possible management metrics be in terms of happiness? Looking at the example of Bhutan, the following metrics could be added to the financial metrics when assessing a company:

The above mentioned is just a selection of possible metrics based on Bhutanian principles. As mentioned before, focusing on solely happiness metrics would not automatically lead to better company results when financial metrics are far from acceptable. Nevertheless, happier employees are proven to be more productive and tend to stay at a company longer, leading to an increase in financial performance.

Having these happiness metrics in place is off course just one piece of the puzzle, however, in a time where the rate of burnouts under employees is growing exponentially, taking some of the GNH principles into consideration next to financial metrics seems like a good place to start. 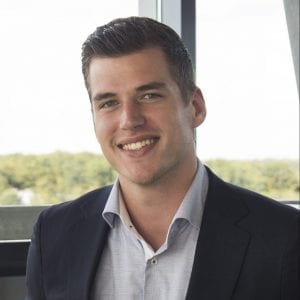 Martin specialises in optimising and innovating business processes from a customer’s perspective. After receiving his Bachelor’s degree in Mechanical Engineering and his Master’s degree in Innovation Management at Eindhoven Technical University, Martin graduated at the Next Organization writing his thesis on the integration of Sales & Marketing functions into new product development. With his innovative mindset and strong analytical skills he now translates customer needs into tangible initiatives for sustainable results. How Smart Cities Improve Your Life An Employers’ Guide To The Millennials’ Heart TNXTO goes Toronto: An Outlook on FinTech and A.I.